How to Plan a Birthday Party for Your Little Spy

My oldest daughter has been into detective/spy stuff for quite some time. We devour Nancy Drew books, and she even created her own detective bag – complete with note pad, flashlight, secret codes, fingerprint kit, etc. Also, one time during our Bible study, I explained how God has plans for each of us. She asked me if I thought being a detective was what God had in store for her. She’s serious, folks!

So, it was no surprise to me when asked what theme she wanted for her birthday party sleepover, she replied (enthusiastically) “Spies!”

Armed with my Googling fingers, I went to work. I found an abundance of ideas I borrowed from various web sites. We decided to make it a spy training party. The girls would go through a battery of training sessions, then complete their final mission.

Our first activity was the “dexterity training” portion. We created an obstacle course out back, and timed each participant. The winning time earned the agent a little prize (lip balm, play doh, note cards, etc.). 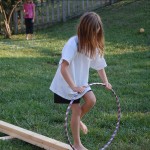 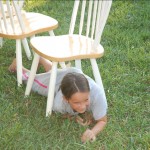 The second training was the “stealth” portion. I got bright pink yarn and strung it in sort of a web across the room. The girls had to go through the “lasers” without touching any of them. 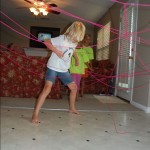 Their third training session was the memory part. I unveiled a tray filled with random objects. They had 60 seconds to look at the objects, then a few minutes to write down (from memory) what objects were on the plate (like the game we’ve all played at baby showers!).

After they completed their training, they received their very own junior agent badges. My husband printed them from the computer. When the girls arrived, we took their pictures, and put their photos on the badges. This was a real treat for the girls. They also got their spy kits. I ordered them from Oriental Trading. 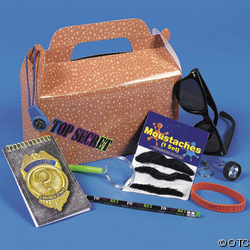 Finally, they were assigned a real mission. A “thief” came in and stole the birthday gifts. A series of riddle clues led them to the hiding place. Once the gifts were open, it was time for cake. I found this cake on a party idea web site, and did my best to replicate it. It was fairly easy – even for this inept baker. The round part of the magnifying glass is just two round cakes stacked. I baked a 9 x 13 and cut it into thirds, using two of the thirds as the handle. 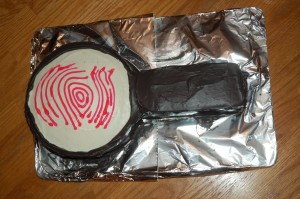 After cake, they donned their PJs and sat down for the Nancy Drew movie. For boys, you could rent Agent Cody Banks or Spy Kids. Older kids could probably watch a James Bond movie or something.

The whole thing was a total blast to put together and execute. I think I had more fun than the kids! Happy party planning. 🙂