Talking to My Second-Grade Self 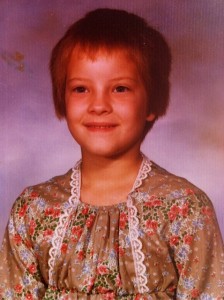 Me in all my frizzed head,
70s shirt wearin’ glory.

I was an awkward kid. I was hyper, and liked to talk a lot. I also operated under the assumption that everyone was just a friend I hadn’t met yet, so if you made eye contact – you were fair game.

One summer, when I was in second grade, my parents enrolled my sister and me in “Children’s College”. It was a really cool program. We boarded a bus each Saturday, headed to the local college to take classes of our choosing. My sister took an art class, I enrolled in drama, and we both signed up for a cooking class (from which I earned my mad French Toast making skills).

The first day, I walked into the drama class before the teacher had arrived. Students were already in there having a grand old time. Rolling chairs were everywhere – a child’s dream.

Most students were lining them up at one wall – and with a quick shove off, they would see who could reach the other wall first. Without hesitation, I grabbed a chair and got in the middle of the action. I was all smiles and laughter and “these are my drama peeps and this is going to be AWESOME!”.

That was until Little Miss Farrah Fawcett Bangs with her judging elementary eyes looked at me and called me a “Copy Cat”.

I stopped my rolling chair dead in its tracks and left the class. I’m not sure if I ran dramatically from the room with my arms flailing about like octopus tentacles or if I slipped quietly in my embarrassed shame. Either way – I ended up in the hall in tears.

The German teacher and one of his students happened by and he asked why I was crying. Through choked sobs and snorts, I managed to relay my story. He let me calm myself down a bit and then told me something. He said I shouldn’t let what other people say to me or about me affect me like that (or something to that effect – this country girl hadn’t been around a German accent much at that point). He said I should stand up for myself.

Although I’ve remembered that incident often throughout my life, it’s taken me many years to realize that I can actually stand up for myself. If I could go back to my elementary school self, I’d tell her that. It’s okay to tell Little Miss Farrah Fawcett Bangs it’s unacceptable to call you a Copy Cat.

You might even need to stand up for Little Miss Farrah Fawcett Bangs sometime, too, because you don’t why she’s mean. She might be fighting a battle you don’t know about.

What would you say to your childhood self if you could go back and share some advice?

Blog Month assignment #1 was to write a blog post to your childhood self like I did in the one above. For more details about this week’s assignment, go to: