I Left my Heart in San Diego

Yes, I know that song goes with another well-known California city. However, it certainly sums up my visit. I fell in love with San Diego before my plane ever touched down. Maybe it was my bird’s eye survey of the terraced land and varied architecture hugged by the Pacific. Maybe it was the easy navigation of the airport – always a plus in my book. Either way – I was hooked. 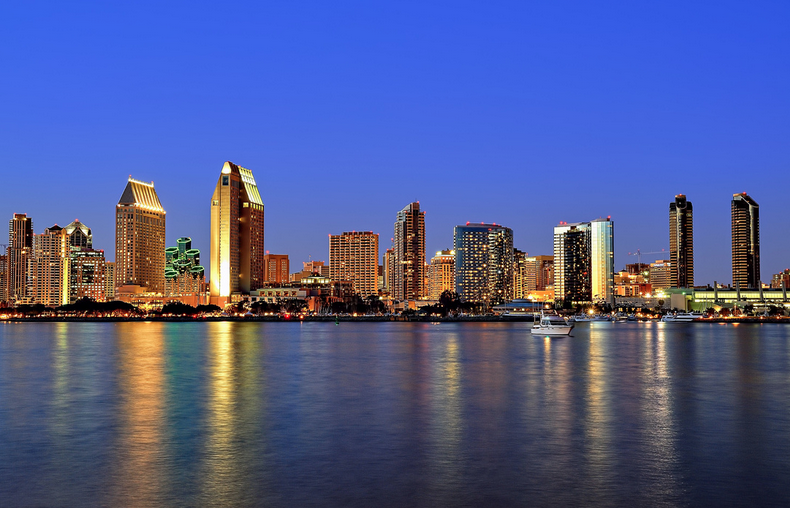 The city exudes an atmosphere of friendliness and ease. Honestly, I kept looking for a welcome mat. The number of varied diversions here is almost as impressive as the city’s affability. History, arts and culture, parks and nightlife – you name it.

Hitting the Old Town Trolley Tour is a great way to get the lay of the land. Hop on and off at one of 11 stops on the 25-mile tour of San Diego and Coronado. Stops include the San Diego Harbor, Old Town San Diego State Historic Park, Balboa Park and the Gaslamp Quarter. Trolley pick-ups and drop-offs are frequent, so you can enjoy different areas at your leisure. 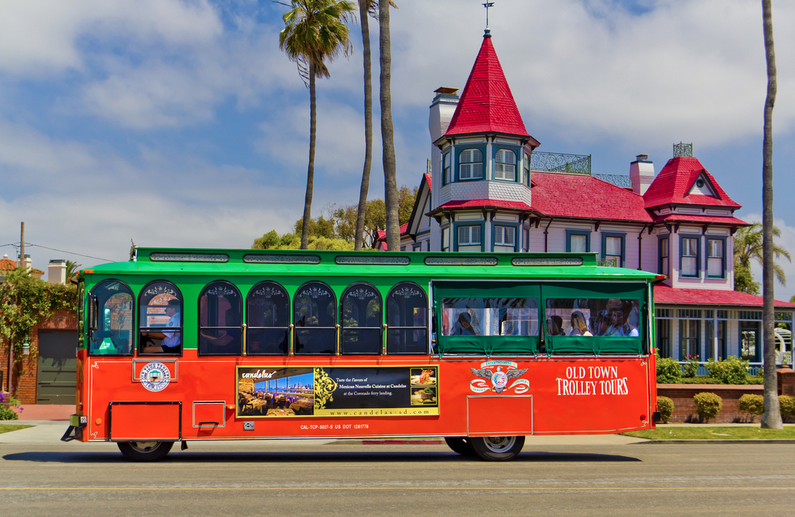 San Diego’s downtown waterfront area is definitely worth a stop. Tool around admiring the scenery – large, eclectic sculptures dot the walkway. You can also climb aboard an actual aircraft carrier – the USS Midway. Now a museum, the USS Midway was the Persian Gulf Flagship for Operation Desert Storm in 1991. It’s also the longest serving Navy aircraft carrier of the 20th Century.

Just across the bridge is the picturesque beach resort area of Coronado. The expansive beach alone is worth the trip. The sand’s mica content creates intense sparkle that rivals the glinting of the sun off the water. Off the beach, Coronado’s main street of Orange Avenue boasts restaurants, shops, galleries, and theaters. 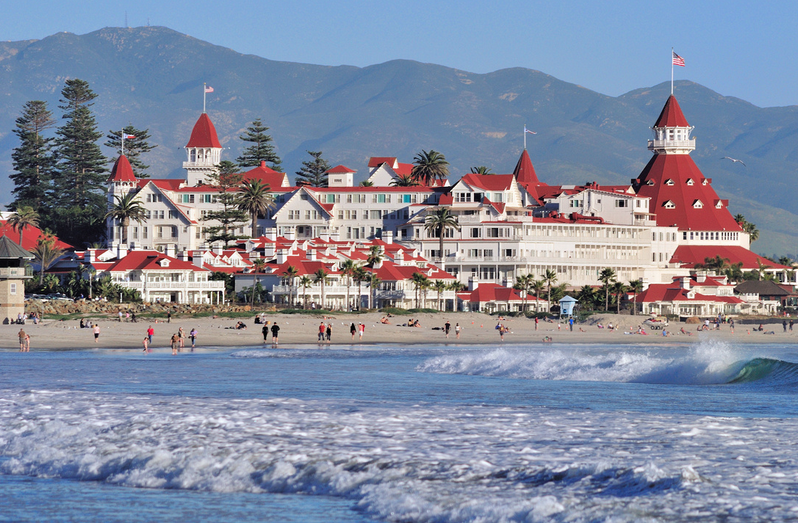 My favorite part of Coronado (believe me, it was hard to choose) was enjoying Sunday brunch at the famed Hotel del Coronado. This registered National Historic Landmark is an architectural masterpiece, with its distinguishing red peaked roof and castle-like turrets and domes. “The Del” has long been a playground for the Hollywood elite – Charlie Chaplin, Greta Garbo, Marilyn Monroe, and Jimmy Stewart are just a few.

Located just north of downtown, and conveniently on the trolley route, Old Town San Diego Historic Park reflects the Mexican and Early American years of 1821 to 1872.

It’s comprised of adobe structures reflecting the Mexican period of early San Diego. The Whaley House Historic Museum, First San Diego Courthouse, and the Mason Street School are among many interesting highlights. Hungry? Pop into any number of restaurants for delicious authentic Mexican Fare – I recommend the quesadillas and margaritas at Café Coyote. Many restaurants serve fresh baked tortillas at walk-up stands if you’re in a hurry. 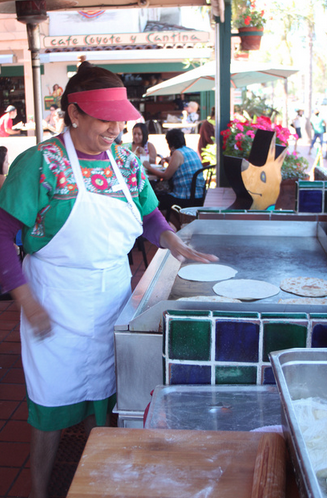 Art and culture are weaved throughout San Diego, but a huge chunk of it can be found right in 1,200-acre Balboa Park, the nation’s largest urban cultural park.

It was the site of the 1915 – 16 Panama-California Exposition and later, the 1935 California Pacific International Convention. The Botanical Building, the California Tower, and the California State Building and Quadrangle are actually some of the original Spanish-Renaissance style buildings constructed for the exposition. 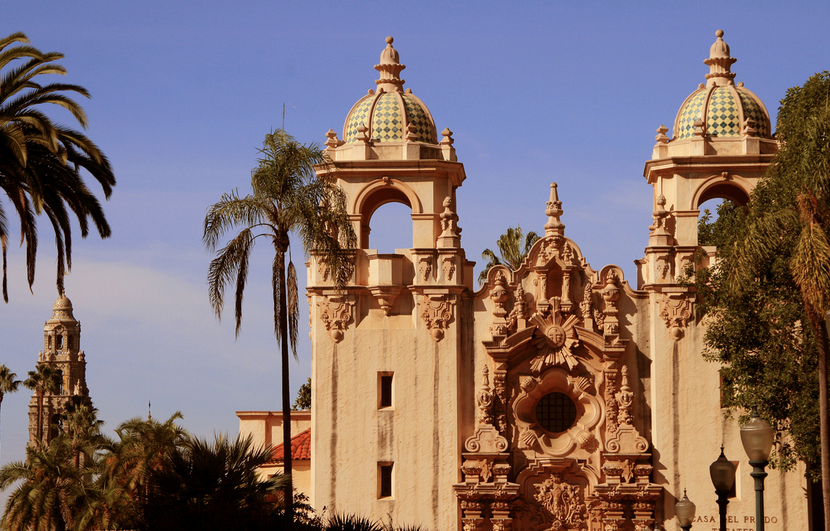 Museums, local artists’ studios, theaters, and shops vie for your time. Don’t miss the Old Globe, a Tony Award-winning theater replicating Shakespeare’s famed playhouse. The Old Globe presents 15 plays and musicals throughout the year on its three stages. To celebrate its 100th anniversary, Bolboa Park will play host to special events and exhibits in 2015.

The San Diego Zoo is also located within Balboa Park. The zoo and its sister facility, the Safari Park, span some 2,100 acres. Lion-tailed Macaques, Sun Bears, Gorillas, Hippos, and the largest colony of Koalas outside of Australia make their home here. One of the newest attractions, Tiger Trail, journeys to Sumatra, home of the endangered Sumatran tiger.

Your days in San Diego can be filled rather quickly. However, save your energy for the abundant nightlife here – particularly in the Gaslamp Quarter. In addition to bustling nightclubs, restaurants of note are plentiful. Fogo de Chao Steakhouse and Oestra Fishhouse are two you should definitely consider.

San Diego has also emerged as one of the country’s hottest places for craft beer, boasting more than 90 local breweries. Stone Brewing in Liberty Station, Mike Hess Brewing in North Park, and Ballast Point in Little Italy are some new ones to check out. 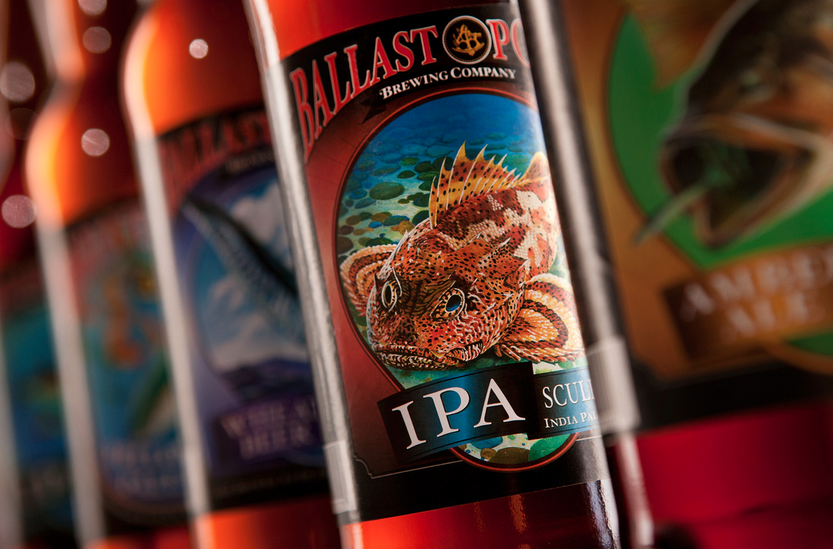 New and delectable restaurants worthy of a visit have also opened in some popular neighborhoods. ACME Southern Kitchen, in downtown’s East Village; la Jolla’s Bijou French Bistro; the Patio on Goldfinch, located in Mission Hills; and Little Italy’s Juniper & Ivy should all be on your radar.

However you decide to spend your days and nights in San Diego, I would almost bet my trolley tokens you’ll want to come back for more. Happy travels!

Hilton Head Island Under the Radar